What Is It About "Don't Twitter" You Do Not Understand?

A murder conviction and death penalty sentence were reversed and remanded in part because of tweets by a juror during trial. In a potentially game-changing decision, the Arkansas Supreme Court in Erickson Dimas-Martinez v. Arkansas, addressed an issue different from many other cases of Internet abuse by jurors. The issue facing the court was whether a juror's violation of the court's instruction by tweeting about the case denied the defendant a fair trial, not whether the content of the posts reflected bias or prejudice against the defendant. As such, the facts of tweeting and its timing during the trial proceedings are of interest.

Prior to opening statements, the trial court gave an instruction which included:

Jurors were thus specifically instructed not to post comments on Twitter and were repeatedly instructed prior to each recess not to discuss the case with others. During lunch after the state's rebuttal case in the sentencing phase had been presented, Juror 2 tweeted, "Choices to be made. Hearts to be broken. We each define the great line." This tweet triggered a court hearing into the matter during the trial. The relevant exchanges are as follows:

THE COURT: Now, it has been brought to my attention that during—during the course of the trial that you have from time to time, uh, twittered, whatever that is. Have you?

JUROR [2]: Um, I twittered like day three in court or, you know, something about—not necessarily the case but just the time link about the court.

THE COURT: All right. But you haven't—

JUROR [2]: Not discussed any of the case.

THE COURT: Well, I want to ask you about a specific twitter and, uh, I want you to think about it and then tell me what it means.

THE COURT: Okay. It's says: "Choices to be made. Hearts to be broken. We each define the great line." About 20 hours ago via text. Now what does that mean?

THE COURT: Would you prefer to come up here to the bench?

JUROR [2]: What it means was, um, not only like to pertain to this case but also to future stuff. Um, obviously, whatever we as a jury decide—you know, I'm not necessarily saying I know what's going to be decided, but we have to decide—make a huge decision. Either way, you know, if we do decide something like it's just gonna—a lot of people are either going to be mad about it watching the news because, you know, people have expressed to me you're on that court case, right? I can't talk about it. So I leave. So there's a ton of people watching this. And either way we decide, people are either going to be angry or people are going to be hurt either way. So what I was meaning by that was, you know, we have to define the great line of, you know, where we stand on a subject and, you know, what we have to choose—decide in the future. And also "Define the Great Line" was an Underoath album, and I thought I'd throw that in there along with my tweet.

JUROR [2]: No, because I'm waiting for the other 11 to help me come to a conclusion.

THE COURT: All right.

THE COURT: All right. Mr. Stone, do you have any questions of [Juror 2]?

THE COURT: All right, have—now, have you followed the Court's instructions about not discussing the particulars of this case with anybody?

This case is of interest for several reasons. First, the Arkansas Supreme Court ruled that the juror's failure to follow the trial court's instructions was prejudicial and that the trial court's failure to dismiss the juror or order a new trial was an abuse of discretion. The court did not require a showing of prejudice in the content of the posts. Second, as noted by the court, a reporter was "following" the tweets of this juror, thus increasing the public nature of the juror's comments. (Yes, reporters and others are likely to follow "tweeting" jurors, if discovered.) Third, jurors often fail to view postings/tweets as "discussing" the case with others.  As Juror 2 commented, "people have expressed to me you're on that court case, right? I can't talk about it. So I leave," which indicates that he refused to discuss the case in face-to-face interactions, yet he felt that he was not discussing the case when he posted his tweets (which also is reflected in his answer to the judge's final question about not having discussed the case with others).  Finally, the juror was shocked and creeped out by the fact that the court had viewed his tweets (i.e., I'm a little shocked. That's a little creepy."). This reaction reinforces that fact that jurors are often unaware of just how public their activity is on the Internet—a point I make in my book.

This case also highlights the need to take affirmative steps to assess the potential for Internet abuse by jurors and to provide meaningful measures to minimize its impact on trials. First, parties need to determine potential jurors' footprints or presence on the Internet either through pretrial investigations and/or voir dire questioning. It is more likely that a Facebook posting, blogging, and/or tweeting juror BEFORE trial would continue to engage in this behavior during trial than it would be for other jurors to suddenly pick up this behavior.  Second, instructions against this prohibited behavior must be concrete, specific, and repeatedly delivered, including reference to the consequences for such violations. Constant references to "not discussing the case with others" simply are not sufficient. Finally, in addition to the need for more explicit and detailed instructions (and the instructions in this case did include a specific reference to Twitter), courts should consider having jurors sign a pledge that they will not engage in Internet abuse. In the recent criminal case of United States v. Viktor Bout, U.S. District Judge Shira Scheindlin had jurors sign the following pledge, which bans Internet research and communications (the description of which should be more concrete and specific in the future). 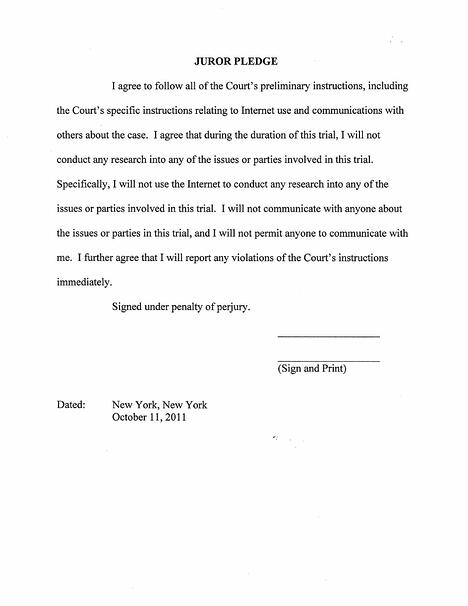