“I read your '8 Tips for Group Voir Dire' and thought it was one the best trial technique articles I have read. I really enjoyed it and will use the ideas in teaching my law school class.” - Roy Black, Esquire Black, Srebnick, Kornspan & Stumpf, P.A. 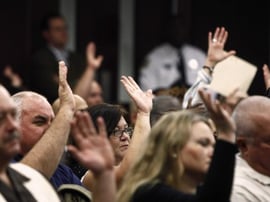 So far, our Tips series has focused on setting the stage for effective voir dire (Tip 1; Tip 2; and Tip 3), capitalizing on open-ended questions to increase our understanding of jurors (Tip 4), avoiding the “looking good” bias (Tip 5), crafting questions with the “bad” answer in mind (Tip 6), and using questions that contrast viewpoints or positions (Tip 7).  Our next tip addresses asking questions later in voir dire where the majority of jurors will raise their hands. (Click here to see a short video for this tip.)

A major problem often encountered during group voir dire is the tendency for participation by jurors to decline as questioning continues.  This decline in participation is a result of two major forces.  First, the way voir dire is conducted and the type of questions often asked tend to seek minority responses. That is, we are interested in nontypical information, and, as a result, only a few, if any, jurors respond affirmatively to these questions. Consider the following:

“How many of you have had a negative experience with law enforcement?”

“How many of you have been a party to a lawsuit?”

These types of questions focus on a likely minority of jurors who have had certain experiences or hold certain beliefs. This situation is further exacerbated by phrases that unnecessarily promote expectations of nonparticipation (and, potentially, negative connotations).  Such phrasing is illustrated in the following approaches:

There are good reasons for asking questions that elicit minimal responses.  Such questions focus information gathering on the most important pieces of information needed during voir dire.  These minority-response questions also facilitate efficient notetaking and record keeping.  But, while necessary, an unwanted side effect of asking minority response questions is the tendency for jurors to decrease their participation as questioning goes on.  Jurors become accustomed to not raising their hands and become comfortable in keeping their hands down.  This degrades the value of the group voir dire process.

The second major force that reduces juror participation in group voir dire is the jurors’ natural tendencies to not want to speak in groups.  Jurors find group voir dire to be an intimidating setting under most circumstances.  As discussed in previous tips, (Tip 1; Tip 2; and Tip 3), jurors are reluctant to speak in the formal setting of group voir dire where they are expected to answer questions posed by relatively high status individuals in a public setting, including their fellow jurors and possibly the news media. Here, as with the start of voir dire questioning, approaches must be taken to encourage participation.

The above complementary forces can reduce group voir dire to a negative spiral where less and less information is obtained as the questioning continues.  There are several strategies that can be taken to combat declining participation (two of which will be covered in future tips).

The above discussion, while seemingly obvious, was designed to set up a structural remedy that is deceptively obvious.  That is, if you change the structure of the question you can change the level of participation.  The strategic insertion of majority response questions during the course of voir dire questioning forces jurors to participate, thus facilitating jurors continued participation during future questions.  There are two basic ways to use majority response questions: “flipping” the question and asking qualification-based questions.

“How many of you have been a victim of a crime?”

“How many of you have been a party to a lawsuit?”

These questions can be “flipped” to produce the following majority response questions:

“How many of you HAVE NOT been a victim of a crime?”

“How many of you HAVE NOT been a party to a lawsuit?”

The value of such strategic flipping of traditional minority response questions is that not only do you get a majority of jurors to raise their hands but also you can still get the critical information you need. You simply follow up with those jurors who do not raise their hands. Consider the following:

(Juror Smith did not raise his hand)

“Mr. Smith, I see that you have been a victim of  a crime.  Could you tell me about your experience?

“Mr. Smith, I see that you have been a party to a lawsuit.  Would you tell me a little about that situation?”

There is an additional benefit in the above situation.  By asking questions of those jurors who fail to raise their hands, jurors quickly realize that they cannot avoid participation by keeping their hands down.

Qualification-based questions. A second, and even simpler, approach to asking majority questions is to judiciously ask a few questions based on the qualifications for jury service.  In Tip 3, we used this approach to get jurors participating early during voir dire questioning.  It is easily applied in later stages of the questioning process as well.  The following are examples of this approach:

How many of you have lived in (this city/county/area) for the last (x months)?” (The information in the parentheses represents statutory requirements.)

“How many of you are registered voters?” (In some federal courts, voter registration is a necessary condition of jury service.)

As with getting jurors to participate early during voir dire, while the answer is important in terms of juror qualifications, the intent of the question is to break the ice again and get jurors participating in the process by raising their hands.

Dr. Frederick will be presenting 60-minute program based on his book, “Mastering Voir Dire and Jury Selection: Gain an Edge in Questioning and Selecting Your Jury,” for the ABA Solo Small Firm and General Practice Division’s November 21, 2018, session of Hot Off the Press telephone conference/podcast at 1 p.m. EST. There is no registration or fee required. All you have to do is call the Dial-In Number and use the Conference ID listed below.

Also, mark your calendars for January 25, 2019, where Dr. Frederick will be presenting a CLE program entitled, “Mastering Voir Dire and Jury Selection,” at the ABA Midyear Meeting at Caesar’s Palace in Las Vegas. This CLE program is free but you must register at:  https://www.americanbar.org/groups/departments_offices/meetings_travel_dept/midyear-meeting/