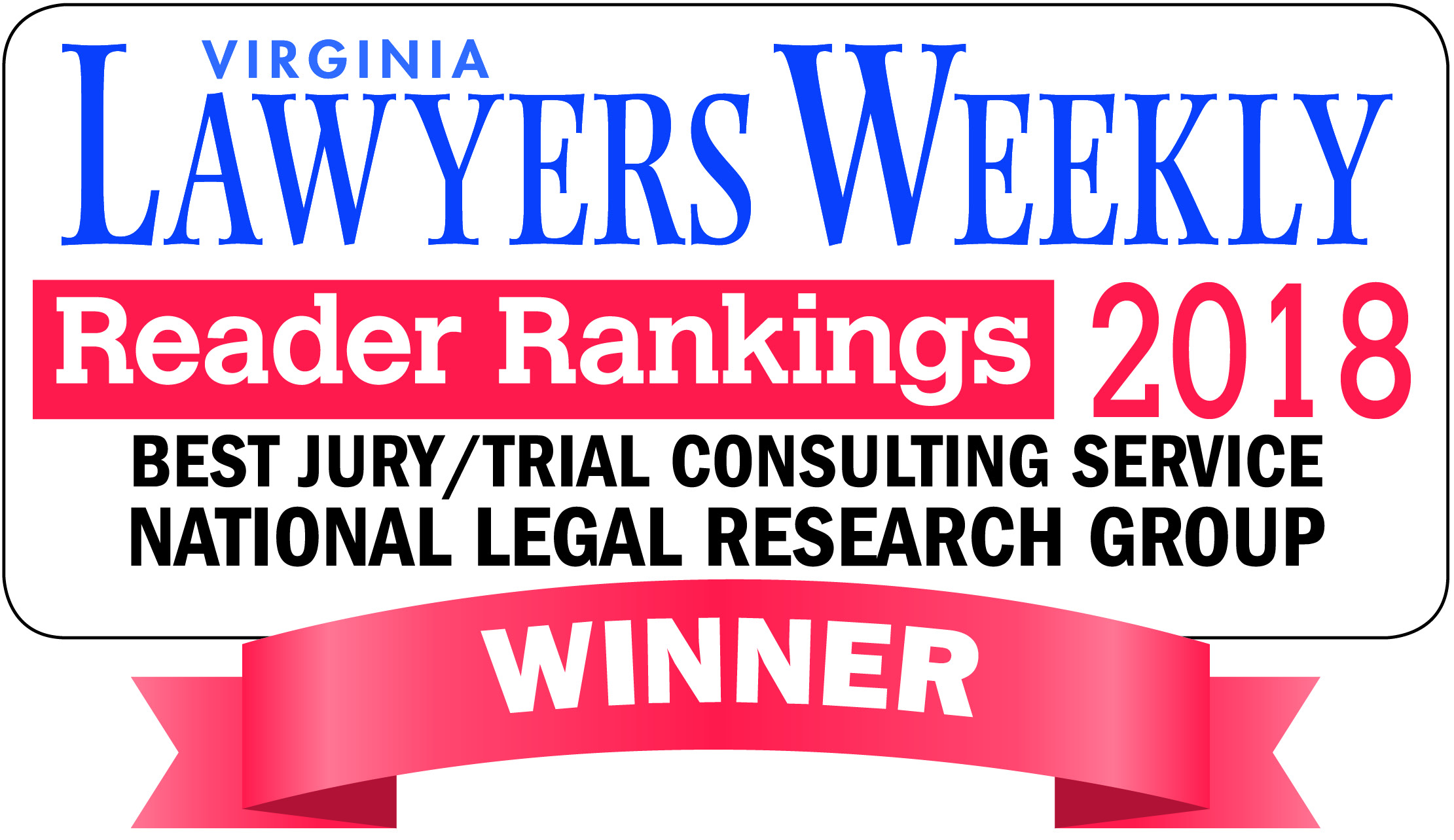 Two recent events highlight our Jury Research Services Division’s work and dedication to forwarding an understanding of jury behavior and jury trials for the legal community. These events are the number one ranking by Virginia Lawyers Weekly Readers for Best Jury/Trial Consulting Service and our two books on jury selection that currently are ABA best sellers.  These books are showcased in the ABA newest and best-selling books in the Litigation category (2 of the 10 litigation books featured) with a corresponding 25% discount until October 31st.

The American Bar Association’s Solo, Small Firm and General Practice Division announces the publication of two books on jury selection by one of the nation’s most experienced trial consultants. Since Mastering Voir Dire and Jury Selection: Gain an Edge in Questioning and Selecting Your Jury first appeared in 1995, its content has continually evolved, responding to changes in the law, social science research, and developments in jury trials. Its newly revised Fourth Edition includes an extensive discussion of the opportunities and challenges presented by the prevalence of the Internet and social media in jurors’ lives, and the applications of civilian voir dire and jury selection techniques to military courts-martial.  The second book, Mastering Voir Dire and Jury Selection: Supplemental Juror Questionnaires, serves as a companion to the Fourth Edition. The book examines how to develop and use supplemental juror questionnaires and provides supplemental questionnaires used in more than 20 significant criminal and civil trials across the nation.

In many, if not most, jurisdictions, the list of potential jurors is made available to the parties at some point before the day jury selection begins. As a trial consultant, I am often called upon to conduct research on potential jurors before trial. This research consists of general Internet searches and utilizing sources like social media (e.g., Facebook, LinkedIn, Twitter, and Instagram), news media, publicly available databases (e.g., political contributions, parties in civil lawsuits, housing values, and other public records, etc.), and any custom databases developed specifically for the litigation. Discussions of these activities can be found in chapter 8, “Jurors and the Internet,” of my book Mastering Voir Dire and Jury Selection.

However, what happens when you don’t get the jury list until the day of trial? Do you give up using information outside of what you can gather through voir dire? Obviously, the information uncovered during voir dire questioning is of primary importance. But outside information can be extremely valuable also. To further complicate the picture, let’s add an information collection target of two hours from the start of voir dire for a venire of 31 potential jurors. Well, a colleague and I recently faced this situation. What we did may get you thinking creatively also.

Recently, the judge in a criminal trial dismissed a jury prior to impaneling them after a friend of the defendant allegedly contacted one of the jurors through Facebook. The juror had reported this contact to the clerk of court. Review of the defendant's recorded telephone conversations from jail revealed the defendant, his girlfriend, and his mother discussing the names of three jurors, one name being that of the juror in question, with instructions from the defendant to contact them. The judge immediately dismissed the jury and revoked the bond of the defendant. An investigation into jury tampering is ongoing.

In March 2011, a former councilman in South Carolina was convicted of jury tampering when he e-mailed grand jurors. He had e-mailed the foreman of the grand jury requesting that the grand jury look into cases of corruption in government.

Much has been made of the impact of the Internet on jurors and the jury system. However, little attention has been paid to the threat posed by individuals contacting potential and trial jurors with the intent of influencing their verdict OR for that matter, jurors contacting the parties themselves, as was the case for a Manchester, England, where a juror received an eight-month jail sentence for contempt for both engaging in Internet research and having online conversations with an acquitted defendant through Facebook. Unfortunately for the juror, she was still deliberating on the fates of the remaining three codefendants at the time.

Of course, jury tampering is not a new phenomenon. While the situation described at the start of this blog may not be the first instance of attempted jury tampering via Facebook or other social networking media, it serves as a warning of a new potential threat to jury trials. According to a Pew research study, 79% of adult Americans are using the Internet, with 59% of these using social networking sites ("SNS"), including Facebook, MySpace, LinkedIn, and twitter.  These SNS serve as a direct channel to jurors serving in our courts today.

Many courts today are revising jury instructions to address Internet issues. However, these instructions, justifiably, tend to focus on jurors seeking information on the Internet. It now appears that additional attention should be directed to instructing jurors early on about (a) not accepting "friend" requests before or during the trial by unrecognized inquirers; (b) reporting to the court all contacts or attempted contacts received from unrecognized inquirers (and recognized inquirers if relevant to the trial); and (c) admonishing jurors against contacting the party(ies) or witness(es) before or during the trial. These instructions should be added to the Internet instructions that address issues of communications concerning the case and the seeking of case-related information or other related Internet searching activity.

As I point out in my book on voir dire and jury selection, Internet-related instructions should be treated separately from other media-related instructions and should include a discussion of the consequences for the juror and the trial that could arise from such activities.

Recently, the juror questionnaire used in the perjury trial of baseball slugger Barry Bonds included instructions concerning the Internet and a statement of the consequences for such violations with an affirmation that the juror understood the court's order. This practice should be refined and expanded.

Two remedies that I think are not warranted at this time are (a) having jurors accept a friend request from the court, and (b) using anonymous juries. The first option is more invasive and premature at this time.  The second option, using anonymous juries, was first fully implemented in 1977 and has received greater attention as of late. However, this remedy introduces the potentially negative effect of the influence of jurors rendering decisions under conditions of anonymity that are not warranted without significant concerns over juror safety, harassment, or intimidation. One study, and the only one found in a search on the topic, found that anonymous student-juries were more likely to convict and to use the most extreme sanction upon conviction than were nonanonymous juries.